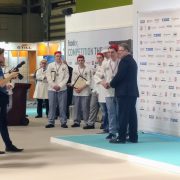 Daniel Symes, 18 of Leamington Spa, made it to the final of the Premier Young Butcher competition organised by the National Federation of Meat and Food Traders and hosted by William Reed Business Media at Foodex, Birmingham NEC on Monday 16th April.

Ably coached by World Champion Butchers and mentors to Aubrey Allen apprentices, Martin Crombie and Michael Perkins, Dan faced a nerve-racking competition that lasted six hours and played out under the watchful eyes of judges and the public at the Foodex exhibition.

There were just seven butchers from around the country chosen to compete after being shortlisted and only one from Warwickshire all competing to take the title of Premier Young Butcher. Dan battled through to take first place in the seam butchery category and runner up in Stuffed roast category.

Dan was spurred on by the success and said “I really enjoyed it and I just want to get better and better at my craft. I am in awe of master butchers like Michael and Martin but I know I want to be like them one day and this has given me the confidence to go forward. I am delighted I won the craft Butchery section and was highly commended in the Stuffed Roast category. Next time I am determined to win the National Title”

Simon Kelly, Leamington Spa shop manager who was there to cheer him on and encourage said “We are all so proud of Dan – he was done amazingly well. He is a real asset to our team”

Dan joined Aubrey Allen in 2016 and was signed up to the Trailblazers Apprentice scheme.