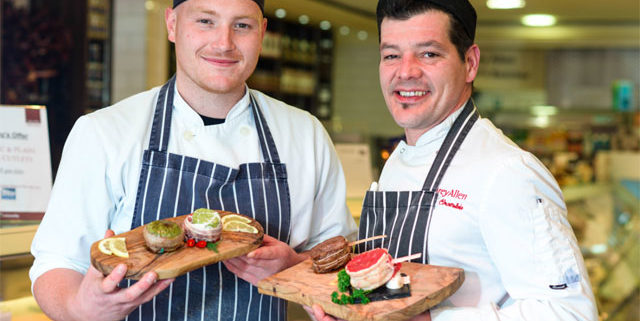 Britain’s passion for dry-aged beef, and the demand by ‘MasterChef’ wannabes for high quality ingredients, has inspired two local master butchers from Leamington Spa to create two new national award winning sirloin steak cuts for fine dining, either in or out of the home.

The noisette cut developed by Martin Crombie reflects an innovative larder trimmed product using the wing end of the sirloin and is already proving a popular choice amongst customers for dinner parties. The pavé in contrast by Nick Clayton-Gale uses the back-end of the sirloin, is larder trimmed in a circular shape and served with a Café de Paris sauce to create a restaurant quality dish that is equally easy to cook at home.

Commenting on the new one bone sirloin noisette, Martin Crombie said that the reason behind inventing this cut was to provide a 6oz – 7oz size sirloin steak for diners who prefer their meat cooked ‘rare’ or ‘blue’. Nick Clayton-Gale added that his sirloin pavé provided a restaurant style prepared product in a raw form.

Aubury Allen’s butchers are the first winners of these inaugural Eblex awards, which have been launched to showcase both the creative and technical skills of independent butchers, farm shops and foodservice operators throughout England.

Aubrey’s Dry Aged beef is sourced from naturally reared, grass-fed suckler herds that have been allowed to develop slowly. It is then matured for a minimum of 21 days to intensify the flavour and encourage the natural tenderisation that occurs during that period.

Aubrey Allen is a family owned butchery business established over 80 years ago, with a reputation for supplying quality meat. As well as operating a successful retail outlet, Aubrey Allen is a well-respected catering butcher supplying over 400 restaurants and pubs throughout the UK.

Want to join the discussion?
Feel free to contribute!

Butcher’s Hook at the Baftas
Scroll to top